She was the daughter of the nth cousin of the nth cousin of my father. And she studied in my school. And also in 2E. Same class. Same section. And so, of course, I just had to go and be all sickly sweet and ask her how she was and did she know x person? And of course then, she must be knowing all about y and all that blah.

And then, 3 days later, ‘Ohhh..you meant x person? Well, of course, I call her z, and that’s why I didn’t recognize it!’ And so all is good, and yayyay!! And also, ‘Ramgorurer chhana is just yum! Don’t you think?’ (Well, not exactly that. But words to that effect)

And of course, you have to launch into an animated conversation after that!

Class 3 was spent wincing. Homeworks copied for me when I fractured my collar bone. And poring over Pagla Dashu together.

Class 4 was Enid Blyton. Joint discovery. ‘Shadow The Sheepdog’ read out aloud in class by B Miss. And we were hooked. Both of us. Malory Towers and St.Clares and oh! Midnight Treats and riding lessons! FiveFindOuters and Famous Five and how we both wanted to disguise ourselves and get a dog. 4 was also the time of house-visits. Mutual. It meant tape frocks and sharing cool slices of mango and orange fish cut outs, and marble paper ice cream cones with cotton as icecream, for show-and-tell.

Then high school happened. And class 5 was
'Captain Planet he is a hero,
Gonna take pollution down to zero’….all the way.

Agatha Christie and first menstrual cramps, we dissected them all. Anonymous flowers left for her on the school desk in class 8. (she was , and still is, breathtakingly beautiful :) ) and I was the one who went to investigate the source. First crush ( a humongous one, might I say) when I was 12, and she was the one at the receiving end of my lovesick swoons and very very bad poetry. Sandwiches wrapped in silver foil in a plastic box wrapped in a checkered napkin, which were dutifully exchanged with cold and soggy French toasts dunked in ketchup.
‘Day spendings’ at each other’s houses when much time would be spent drooling over Hrithik Roshan and dancing to ‘Ek pal ka jeena’. Detailed exchange of Bangkok and Benares adventures and attentive story telling/listening sessions featuring ‘Anna and the King’, ‘Ever After’, ‘Jumanjee’ et al.
Sharing orange sticks during sports practice, and feeling a tinge of pride (amidst a lot of disappointment) when her house won the march past competition (well our house won the house championship and so there!!). And yes, still drooling over Hrithik Roshan. All night ‘addas’ under the blanket during the school excursion in class 11, and getting to know all about steroids and constant reminders to keep inhalers within reach. (she had chronic asthma..)
Frantic late night calls during class 12 and she would patiently explain theories of probability and the Gross Net Product and suchlike things.
Gravely advising her on her then-would-be-now-steady boyfriend. Bad attempts at learning badminton. And feeding the kittens smuggled in and kept in a wooden box under her stairs. Much beauty tips and yoga snippets shared and the first shoulder to cry on when heartbreak happened. Lots of serious decision making and grave nodding of heads over cold coffee.

Its been almost 13 years since I first met her. Conversations happen. But not long-drawn-out-soul-bearing-types. Busy-schedule-and-respective-colleges-eating-up-time excuses given. Most frequently. Starting where we left off, but the zing is amiss, many a time.

I have just realized that I will have to settle for being the second fiddle. At least in this case.

I should have guessed much earlier.
Posted by March Hare at 5:40 PM 2 comments:

This one is for JUDE.

Due to certain legal procedures involved, my previous post has been temporarily removed.
Please do keep checking back.
Thank you.
Posted by March Hare at 1:15 AM 3 comments: 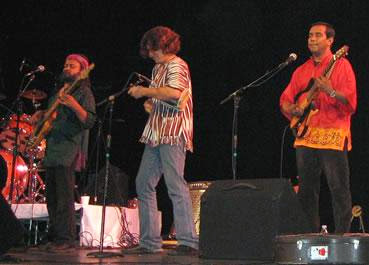 (The picture is not of that day's performance though)
Posted by March Hare at 10:38 AM 6 comments:

Sheesh. It seems nice. The world being full of such friendly people. Oh my!! Be still my heart!
Posted by March Hare at 10:02 PM 5 comments: