In 1947, when didimoni abandoned her ancestral house in Mymensingha to make that fateful journey to the west, she left behind a lot of things. Most of her sarees, the certainty of her life as a district topper, and, more importantly, almost all her prize books. They had her names inscribed on them, she would recall wistfully. Leather harbound books, with golden letters. Certificates praising her for her memorizing things. But that was okay, she said. She was going to a new country, and memories could always be remade. Besides, she could always memorize new things.

My earliest memories of didimoni involve her memorizing things. She would put me to sleep, reciting all of "Abol Tabol" from memory. "You're just making this up", I would insist. "That's really not how it goes." "Yes, that's exactly how it goes", she would smugly assert. And that really, was, exactly how it went. To this day, the genius of Sukumar Ray and the brilliance of my grandmother are inseparable in my mind.

I remember two kinds of people from my childhood - the talkers, who would discuss things endlessly, and the do-ers, who would skip the discussions to get things done. Didimoni was, very firmly, in the latter group. She would cook, knit, sew, advise, mend, create, and comfort - mostly simultaneously, almost everyday, without breaking a sweat. When I remember my grandmother, I remember a flurry of movements, with just a few, brief flashes of pause. The soft, cotton saree anchal, the turmeric-stained fingers, the paan-bata with the supuris, the best mutton curry and patisaptas in the world, the wavy hair that I inherited, the sharp intellect that I didn't quite come into.

In an age when women weren't, really, out and about, my slip of a grandmother - a refugee in a strange country - managed to quietly thumb her nose at the world. She enrolled in a college, got incredible marks, got married, raised two children, ran a household, got herself a job with the RBI, gave it up, and then finally settled on an auditing position with the state government. My mother tells me how she would leave every morning, in her starched sarees and ironed blouses, hair in a bun, spring in her steps - *after* cooking a full meal for the family, packing off children to school, and dealing with a cantankerous mother-in-law. Me? I can barely manage to get my solitary self to work on most days. And most of my t-shirts are rumpled.


Didimoni taught me to memorize. She taught me to love Pujabarshikis, Russian literature, and Darjeeling tea. She taught me to admire Sukumar Ray and afternoon soaps and piping hot jilipis for breakfast. She taught me to cook, to count,to observe the world. To juggle responsibilites and to love Charles Dickens and to always keep a clean handkerchief handy. She kept a cold glass of lebur jol ready for me in summer, and made mowas on misty Saraswati pujo mornings - the smell of warm jaggery seeping into her pores. She taught me to not slow down. She taught me to survive.

Didimoni used to read after lunch. Every day, after the table was wiped down and the food was put away and the extended family hunkered down for the afternoon siesta, she would lean back with her favourite "Desh". We spoke about the world on those magical afternoons. My five-year old self frantically trying to keep up with her observations about world affairs. Never stop looking outwards, she would say. Kupomonduks are the worst.

My grandmother - Sati Sen - Partition surviver and household runner and starched saree-wearer and life tip-giver, passed away yesterday. She was 85. The nature of grief is that it comes in waves. Losing dadumoni and didimoni in quick succession means that, every few minutes, I'm being hit by waves of finality so overwhelming, that it takes my breath away.

I spent my childhood in a rundown house in south Calcutta, being mostly brought up by my two eccentric, lovable, efficient, exasperating grandparents. These two, like millions of others, immigrated across the border during tumultous times, and then set about building a life in a strange country with characteristic aplomb.

And that's what I keep telling myself. That they've just moved across the border somewhere. And it's okay, because they've done this before. And they're out there somewhere, setting up house and cooking mutton and watching cricket matches after lunch. And maybe, sometime, they're looking down at me too.

They're just somewhere else. That's all that it is. 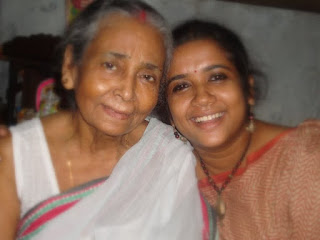