Manali (With four of S' pictures, just so that I remember) 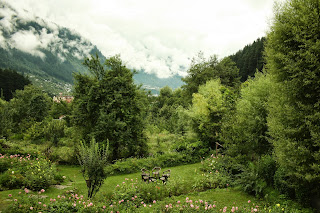 Manali is just as I remember it from three years back. The old man with his huge rainbow umbrella and chocolate pancakes has disappeared from the next door cafe. And Sunshine, wouldn't you know it, has a new coat of paint. But apart from that, everything is the same. The puddles are shiny. The clouds are in my mouth. The Deodar trees are watchful.

It's a little disconcerting at first, this realization of a time warp. The same cobble stone path greets us, and the dahlias are a ferocious pink. The tiny dogs wag their tails adoringly and gulp down entire packets of Monaco. The black one frowns at me the entire time. The brown one doesn't care.

We drink tea and walk slowly up to the Hidimba temple. The six hundred year-old wooden temple of the rakshasi, the outcast, the eternal sacrificial lamb. Eight bloody sacrifices she demands every Dussehra, the sombre signboard tells me. About time, I think. Despite my Monaco-feeding habits, I'm not an animal lover then, am I?

We walk aimlessly down to the nature park and almost lose our way among the trees and the noisy river. I look down at the Beas, and spy young boys precariously perched on the rocks, trying to fish. It's absurd, how beautiful everything looks. It's like I'm in a film, I think. It's like a painting, I think. I'm SUCH a cliche, I think. 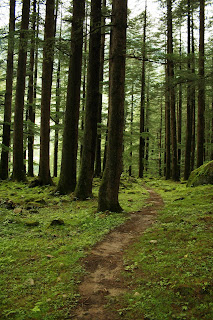 At Chopsticks on Mall road, where I demolish one whole fried trout, we meet old Neil McDonald from Scotland. He offers us his table as he sits looking out of the restaurant window and nursing a beer. He has been in India since 2006, and he walks with a stick. He lives up on the mountains, and his best friends are his thirteen-year old neighbours. "India! Such nice people! So many religions!," he says. I feel a pang of jealousy. Stupid, effing office with a stupid effing salary. Why can't I live up on the mountains and nurse my beer on Friday afternoons in Manali?

When we come back to Sunshine, the rains have already started. The mountains are almost invisible with the downpour and the guest house dog is curled up in a corner. I drink tea and read Steinbeck on the porch, and occasionally stare back at the stern Deodar in the property. 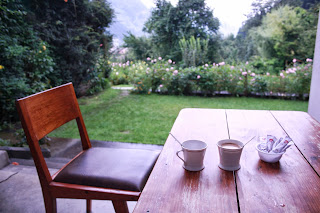 I am a cliche and I have an effing job, and I can't live up on the Manali mountains and the black dog doesn't like me. But at that moment, on that day, I have the mountains under my feet, in my mouth, in my eyes, and in my heart.

And I don't think I give a damn. 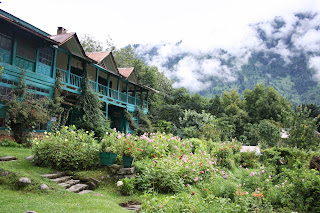